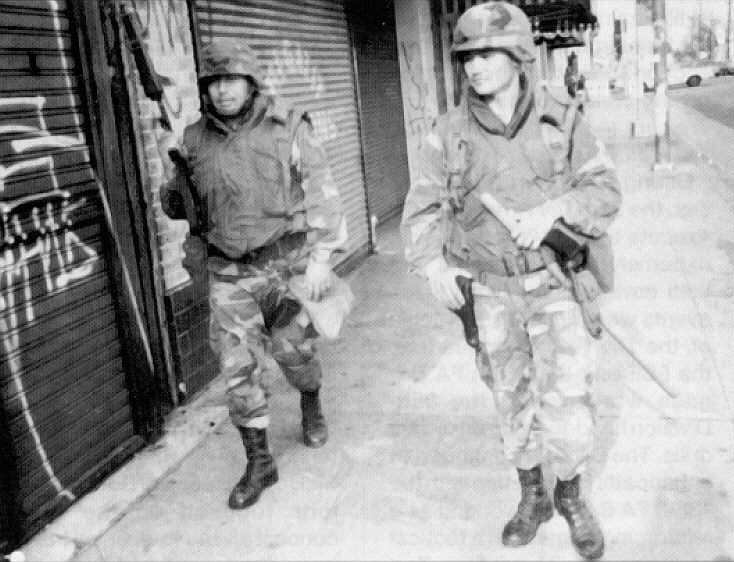 On this day in 1992 the Los Angeles riots broke out in response to two specific incidents in the city and general mounting racial tensions. Just over a year prior an African American man, Rodney King, was beaten and tasered by police during a traffic stop/chase resulting in the officers involved being charged with excessive force.

Also around the same time a teenage African American girl, Latasha Harlins, was shot in a convenience store when the Korean-American shopkeeper accused the girl of trying to steal a bottle of orange juice. The shopkeeper grabbed the girl who hit the woman in order to break free. As the girl walked away the shopkeeper shot her in the back of the head. The girl was holding 2 dollars in one hand when her body was found by investigators. The 51-year-old woman who shot her was convicted of voluntary manslaughter and only ordered to pay a $500 fine and served no prison time.

On April 29, 1992 the officers in the Rodney King trial were acquitted of excessive force and assault charges based on blurry footage at the beginning of a tape showing the beating in which King tried to run away toward an officer.

The acquittal of these officers on top of the light sentencing of the shopkeeper in the death of Latasha Harlins caused many in the black community to further increase their distrust of the criminal justice system after years of accusations of excessive force by the LAPD against African Americans.

The racial tension between blacks and Koreans in LA had also long been brewing due to perceived slights on both sides. Many African Americans viewed the migrants as newcomers who were profiting off of the black community while simultaneously mistreating, stereotyping, and disrespecting them. Cultural differences and language barriers exacerbated the problem as well as economic difficulties facing the area.

All of these tensions came to a head when news of the acquittal of the officers who beat Rodney King reached South Central Los Angeles. Riots and looting broke out that lasted for days and resulted in 55 deaths, over 2,000 injuries, and more than $1 billion of damage. The National Guard was called in and the riots lasted for 6 days. More than 12,000 people were arrested. 65% of looted stores were Korean owned, but black and Latino-owned stores were also looted.

The events leading up to the riots, the riots themselves, and the aftermath all inspired and prompted responses from musicians of many genres, especially hip hop and rap artists. Here are 5 songs that came out of the Los Angeles riots.

“Dear Lord if ya hear me, tell me why
Little girl like LaTasha, had to die
She never got to see the bullet, just heard the shot
Her little body couldn’t take it, it shook and dropped”

Tupac also made mention of Latasha in several of his other songs including “Something 2 Die 4,” “Thugz Mansion,” and “I Wonder if Heaven Got a Ghetto,” in which he raps, “Tell me what’s a black life worth/A bottle of juice is no excuse, the truth hurts.” He also dedicated “Keep Ya Head Up” to Latasha.

“Thinkin’ every brother in the world’s out to take
So they watch every damn move that I make
They hope I don’t pull out a gat and try to rob
They funky little store, but, b****, I got a job.”

Released after Latasha Harlins’ death but before the riots, this song was accused of inciting violence against Asian Americans and encouraging racism against them by African Americans. The song sheds light on the tensions between the two groups in South Central Los Angeles.

Aerosmith has said that this song was inspired by the LA riots, but the lyrics do not specifically state anything that directly links back to the riots. Critics of the song argued it was a half-hearted attempt at social commentary.

“Why oh why must it be this way
Before you can read me you gotta learn how to see me,

I said Free your mind and the rest will follow
Be colour blind, don’t be so shallow.”

“Getting my facts from a Benneton ad
I’m lookin’ through African eyes
Lit by the glare of an L.A. fire
I’ve got a face, not just my race.”

In Los Angeles with his new wife, model Iman, Bowie witnessed the riots firsthand. This experience inspired “Black Tie, White Noise.” Bowie said of the riots: “It was awesome and numbing and it was the most apocalyptic experience I’ve been through in my life. It was a feeling of the irreconcilable differences that seem to have been fabricated in America and how hard it will be to reconcile those differences, to heal the wound, which is quite gaping.”