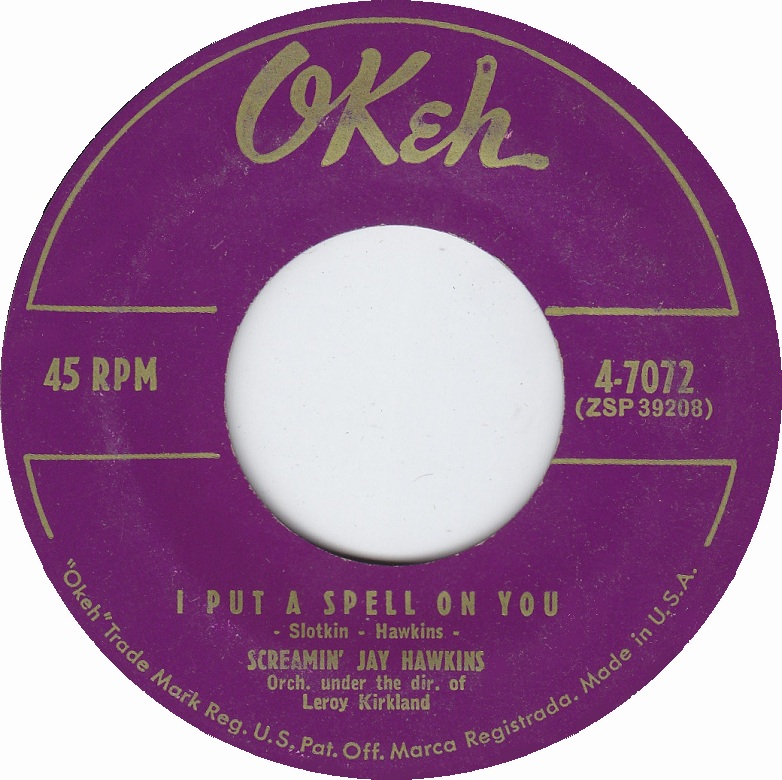 I Put a Spell on You: From Radio Ban to Disney Movie Favorite

What are the origins of a popular song that has become a Halloween favorite? A breakup, a blues singer, and a drunken recording session.

A song many know because of its numerous cover versions, “I Put a Spell on You” is now included on Halloween playlists, owing partly to its inclusion in the movie Hocus Pocus. However, even before its more overt connection to the Halloween holiday, the song was thought of as shocking, demented, and dark, but not solely for the lyrics which suggest witchcraft or voodoo. Originally written and performed  by Jalacy “Screamin’ Jay” Hawkins,”I Put a Spell on You” was released in 1956 and is the song that earned Jalacy the “Screamin’ Jay” nickname. It was Hawkins’ screaming delivery of the song and his resulting performance style that really gave the song its powerful yet outrageous and slightly sinister tone. The song transformed Hawkins’ career and he became the pioneer of the subgenre of “shock rock,” a genre later popularized by artists including Alice Cooper, KISS, Ozzy Osborne, and Marilyn Manson.

“I Put a Spell on You” was not originally intended to be associated with Halloween at all. It was Hawkins’ delivery of the song in the 1956 recording and the resulting live performances that would change everything for the song and for Hawkins. Hawkins, who had operatic dreams, but was working as a traditional blues singer, originally wrote the song as a blues love ballad. With lyrics about getting a lover back after a breakup, the song was influenced by his own personal life. He recorded it as such in 1955, but the track didn’t go anywhere. However, the story goes that a year later when he decided to try rerecording it, the producer brought in food and large quantities of alcohol to the recording session and got everyone drunk resulting in the most well-known version of the song.

However, the resulting version of the song also got it banned from radio. In 1956, Hawkins’ singing, screaming, and grunting, complete with animal noises, sounded overtly sexual to mainstream audiences. The fact that Hawkins was Black contributed to this racist take on the song. Even a toned-down version wasn’t played on most radio stations. Despite the radio ban, the song was Hawkins’ most commercially successful one, though it never made the top charts.

Hawkins’ live performances of the song did little to allay the concerns of many groups. He took to appearing on stage in a coffin, rising out dressed in a “screaming wardrobe”  including zebra stripes, bright colors, and sometimes a loin cloth, holding a spear or a skull on a stick that would sometimes smoke his cigarette while he sang, and with tusks in his nose and a turban on his head.

The NAACP denounced his act with concerns that he was propagating stereotypes of African Americans as cannibals or witch doctors. Some African American newspapers and magazines ignored Hawkins, not wanting to promote his music. The song was released in the era of Jim Crow segregation and the Civil Rights Movement. Many in the Black community had concerns about the act being consumed by white audiences for which it upheld dangerous and negative images of Black people.

Despite all of this, the song was Hawkins’ biggest hit, with Hawkins being featured in DJ Alan Freed’s Rock and Roll Revue. The song has gone on to be covered by numerous artists. Some of the most well-received covers include those of Nina Simone, Creedence Clearwater Revival, Marilyn Manson, Bette Midler (in Hocus Pocus), and Annie Lennox, but there have been many more.

Nina Simone’s cover was especially well done with the song taking on a whole new meaning when sung with her amazing voice. Simone slowed the track down more to the ballad tempo it was originally meant to be, but with powerhouse vocals and jazz style scatting. The track became so much a part of Simone’s body of work that she titled her autobiography “I Put a Spell on You.”

Bette Midler’s rendition in Hocus Pocus has become particularly popular at Halloween owing to the movie’s rising popularity as a cult classic. It seems to be more popular as it ages with references to it on signs, t-shirts, and more as Halloween approaches. Midler as Winifred Sanderson changes many of the lyrics to fit the spell she was casting while singing but hers is one of the more well known uses of the song, though it has appeared in several other movies and in commercials.

Jalacy Hawkins’ song had a long life after him as artists continue to cover it. However, the song and its influence on his stage persona changed his career trajectory so much that he had difficulty getting other records taken seriously and many shied away from playing his records because of fear of associating with him, even when records were more traditional. He didn’t really benefit financially from the song despite the fact that many covers of it happened in his lifetime.

Read more about Jalacy “Screamin’ Jay” Hawkins, who had a difficult childhood, served in the armed forces, and had a relatively successful boxing career, all before the release of “I Put a Spell on You.” Links to further reading below.

These first two links are obituaries for Jay Hawkins.

This is an especially interesting article that follows the trajectory of the song over time and speaks to the likelihood that Hawkins’ version was unsuccessful because of racial biases of the time, while later white performers’ versions of the song were more commercially successful and bigger hits on radio charts. It also suggests that Hawkins’ performance style confronted white audiences’ desire to appropriate black music while society still maintained segregation and oppression of African Americans.