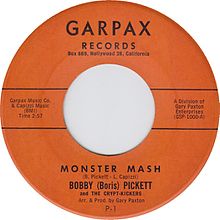 The Monster Mash: 3 Interesting Facts About the Halloween Classic

The Monster Mash. It was a graveyard smash.

Monster Mash was released in 1962. Written by Bobby Pickett and Leonard Capizzi and recorded by Pickett and “the Crypt-Kickers.,” the single hit #1 on the Billboard Hot 100 chart from October 20-27, 1962 and has been a Halloween favorite ever since. Here are a few fun facts about this Halloween classic.

The song tells a story loosely similar to Frankenstein but with a fun, dance twist. A mad scientist’s monster comes to life and performs a new dance which became very popular and led to a party with other monsters.

Below is the video from Bobby Pickett performing the song on American Bandstand October 13, 1964.