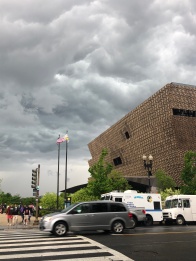 The National Museum of African American History & Culture is one of those museums that pulls you in and keeps pulling you in. From the outside, it stands out, strikingly different from all of the other museums, monuments, and buildings on the National Mall, creating a welcome visual focal point. Entering feels like going into a sacred space. The museum is chock full of artifacts that bring stories to life. It was one of my favorite museum experiences ever (and I’ve had a lot). Many have written about why this museum is important and how it came to be. Below is my experience visiting the museum as a white museum professional. It did not disappoint on a professional or personal level and all of its hype is well deserved.

When my husband and I began planning our trip to DC to visit my brother, one of the first things decided on (after the concert that sparked the conversation) was that I had to go to the National Museum of African American History and Culture (NMAAHC). The NMAAHC opened in 2016 to lots of interest, high visitation, and big impact on not only the world of public history & museums, but on so many individuals. I had heard so much good buzz about the museum but hadn’t been able to visit yet so it was high priority on our list.

We knew advance tickets would probably be necessary and we planned to go on the Friday of our trip to help cut down on weekend crowding, but I misunderstood the ticket release system and we missed our opportunity to get advance tickets! 😦 The other option was to try and get day of tickets first thing in the morning when they would be released for the day, but after arriving in DC in the wee hours of the morning we missed that opportunity as well. Walk-ins (without advance tickets) are allowed after 1 pm.

Worried that we would be standing in long lines and concerned about the chances of maybe not being able to get in at all, we decided to spend the morning at the National Air & Space Museum (you can read about our visit here) and then go to the NMAAHC after lunch (we ate in the Pavilion Cafe in the National Gallery of Art Sculpture Garden which you can read about here). Because of hiding out from rain and how busy the Pavilion Cafe was we didn’t get to the NMAAHC until about 2:00pm on a Friday in April. There was absolutely no line and we were able to go right in and get started. The museum was plenty busy but not overcrowded and we were able to maneuver through exhibits with minimal waiting and crowding. The NMAAHC has changed its ticketing policy already in its 3 years and likely will continue to adjust so if you plan to go, check out their website for the latest. We lucked out on being able to easily get in without waiting, but I would still recommend the advance ticketing system so you can get in in the morning and have more time to view the museum. I have to go back as we only grazed the surface of this museum’s impressive exhibits!

Upon entering, we picked up a map which advised that in order to make the most of your time (and we were already limited on time having gotten there in the afternoon) you should start at the top and work your way down. We didn’t realize until later that this meant we would miss the museum’s main history exhibits which traces African American history from slavery through the present. These history exhibits are all below ground (where 60% of the museum lies). Where we began was with the museum’s culture exhibits which all come off of a central area called Cultural Expressions. This circular area is so immersive with exhibits around the outside, seating in the middle, and large screens encircling above head with images, video and quotes about various forms of cultural expression including writing, music, dance, sport, film, etc. featuring famous or trailblazing African Americans in their respective fields. We began with the exhibit about music.

The music exhibit was full of information and artifacts about African American musicians and singers who have made lasting cultural impressions in American popular and musical culture. Jimi Hendrix, Ella Fitzgerald, Celia Cruz, Whitney Houston, James Brown, Louis Armstrong, and more well-known artists were represented, but so were lesser-known names and contributions to American music including black country and bluegrass artists. The exhibit included an interactive “record store” room in which you could flip through “albums” and learn more about artists and select music on a digital touch screen. It was a rich visual experience with so much to take in. 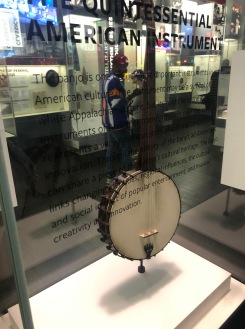 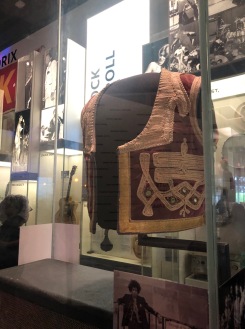 The next exhibit was all about acting, from the stage to the screen. The final exhibit we toured in full was about sports. All of these exhibits showcased the cultural contributions of African Americans to American culture, highlighting inequalities overcome, civil rights advanced, and culture enriched. Black history and culture is American history and culture and these exhibits make that clear by focusing on how African Americans have been a part of it all by focusing on these overarching categories of music, film, sport, relatable categories for people of all backgrounds. 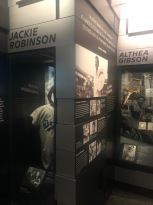 I wish we could have stayed longer but tired brains and feet won out. We skipped the rest of the regular exhibits in favor of checking out the educational area which has a large digital, interactive kiosk of touch screens from which you can browse the museum’s collection. You can select items based on a wide variety of intersectional topics. This was a truly impressive digital resource that had information on so many artifacts both on exhibit and not. 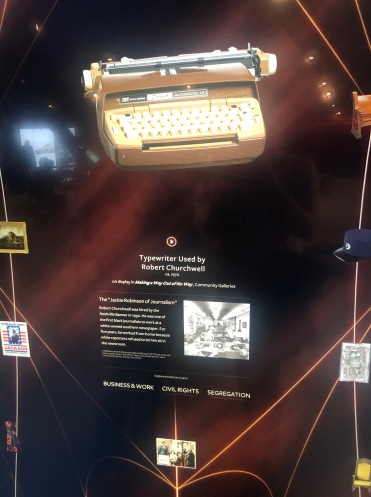 I am a historical consultant, offering research, collections care, and outreach services to museums, businesses, and other organizations. I graduated with a Master's Degree in public history from UNC Wilmington in 2015. I am also an alumna of UNC-Chapel Hill, where I majored in History with a concentration in American History and minored in Archaeology and Spanish. I write about all things history including my work in the field and all things relating to presenting the past to a public audience. I also love coffee, baking, books, sitcoms, and 90's rom-coms. I live in my native eastern North Carolina with my husband and our dog Dia. View more posts

One thought on “National Museum of African American History & Culture: A Rave Review”